Rock and Roll: Where are the women? MELISSA ETHERIDGE 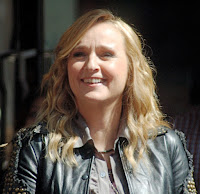 The Rock Hall loves heartland rockers, especially if they're named Bob or Bruce or John
or Tom. But it's long past time for the Hall to show proper respect for a heartland rocker named Melissa Etheridge. Let's be honest: a lesbian kid from Kansas can teach most guys a thing or two about being young and restless and bored. For three decades Etheridge has made defiant music about desires and dreams deferred. She has nothing left to prove. Just listen to this flawed yet wonderful recording of her performing one of her best songs. Imagine that you're hearing a scratchy 45 being spun late at night on an AM station. You've got nowhere to go, do you?
NOWHERE TO GO

AND, In the Rock and Roll Book of Genesis, Bruce begat Melissa:
https://www.youtube.com/watch?v=5cXzFhZVMnQ