My next blog will be a report on two get-togethers by members of Wompo, a virtual group of writers I have grown to know and love. The purpose of that blog is  to document the events for the people who were there, but before I go there, here is my personal take on the group.

WOMPO is short for WOMEN'S POETRY LISTSERV, a virtual group that has been around since 1997 and which I joined in 2003, at the invitation of Claire Keyes. For the previous two years, I had been marching, laughing, and crying alongside my sister, whom I accompanied until her death by Non-Hodgkins Lymphoma in 2002. To say she marched bravely does not begin to describe that journey. Meanwhile I was hanging on to my tenured job in Ohio and supposedly looking for a job in the Boston area, where I finally moved without a job to be with my husband Paul. So I had been what my writer friend Ann Harleman, who moved coast to coast, once called being "the erstwhile wife." Only by then, I was just "the wife," which I had never been identified as before. Never mind I had started a creative writing program at the college I had been at 18 years, that I had run a writers workshop in a medium security prison, gave papers, published three books, advised. The local writers wouldn't even let me into the visiting writers prison program. (They finally did, in 2011, as I was leaving. Whatever you have heard of New Englanders being slow to warm, drop the temperature by 32 degrees, and you have it.)

But every morning, I went to my computer, tuned into the Wompo list serve, and there, waiting was a stack of messages from people all over the world (mostly U.S., but individuals in France, New Zealand, and Iran chime in), all discussing women's poetry-- current, historical, their own, famous, infamous. There were little tiffs and people got huffy and left and came back, but for a year or so, they were my sole poetry community.

A few years later, the group put together a book of WOMPO poems, Letters to the World, totally produced by three editors (and a stable of copyeditors and helpers from the group) and published by Red Hen Press. In the course of a book launch at AWP and promoting the book with readings, many of us who had only met virtually got to meet F2F, as we say, and much as I liked the virtual community, I loved the faces, gestures, the very bodies of the people.

Then in 2010 I came "Home Again" to Ohio, but remained grateful and loyal to Wompo and continue to check in there every morning, even though Wompo is not quite as small and intimate as it once was and some of its old-timers whom I love have left.

So this summer, when I was back  in Massachusetts for a month, I thought it would be great to see some of those faces and bodies again, especially since one of them, Zara Raab, from California, was in the state for the season. I incited two meetings of the group, whose doings I record here for me, for them, for any of you interested in Women's Poetry and poets, whom all of these people are.

If you are interested in the group, check out the link I opened with or their archives, which are here and look for them on Facebook, where you can photos of the two events I now will relate, dear reader.

The intrepid Julia Lisella invited the group of eight to descend on her house on Wednesday, July 9th, for a roundtable of eating and updating on our lives in and out of poetry. I forgot to take notes and later asked everyone to send me the title of what they read, what they were doing and I thought I was joking when I also asked them to report on what they brought for the potluck. However, everyone reported on what they brought to eat, even if she could not recall what she read, which is a reason I love these women so. Here is what they are up to:

...read a poem titled "Yankee Swop," which did conjure up the Yankee Swop lists in the old Yankee magazine, and then took us beyond, and she handed out copies of her beautiful chapbook, Dear Turquoise (Dancing Girl 2013). She was nearly deliriously happy preparing to go to a poetry conference she co-coordinates in Connecticut. She is back now and in poetry recovery, posting her entertaining pretend quizzes on Facebook.

ELLEN GOLDSTEIN
world's greatest copy editor (of Letters to the World  and much more) is also the tersest of the group. She read a poem titled "Runaway," baked a lemon chess pie, and brought a mascot for the group, her sort of bichon-y, poodle-ish dog, Hiro.

JOYCE HEON
...claimed not to remember what she read, but I did since it sparked such a lively conversation among us about recalling our mothers in their younger, or racier days, though her poem was actually on a photo of her mother titled, "And then no longer enjoying herself." The original poem in French as a lai, but she read us an English version. As we commented on her poem and our own mothers, she recalled hearing her mother sing a bawdy song, which start a whole other conversation.


DIANE KENDIG
read her poem, "On Maria Blanchard's Woman with a Fan," because of the connection with Wompo and her growing body of Blanchard poems. ("Maria Blanchard 1914" was published in Wompo's 2008 anthology Letters to the World.) Diane is working on a bilingual chapbook of these poems.

JULIA LISELLA
...read two of her Emily Dickinson inspired poems--"Tattoo In Sophomore Year" and "The Envelope Poem" --stuff she is working on about links to the great gals of poetry! She gave us each a brochure from a spring show called "Rash Vows: Poems and Painting on the Life
of St. Francis", a collaboration of art between Julia and her artist friend Adele Travisano. She's working on scholarship on Genevieve Taggard's prose and poetry and bracing for a fall semester of four courses, four preps, one on "The Long Poem," focusing on Whitman, HD, Mark Doty and Rita Dove.

EVE RIFKAH
not only is a renowned poet but the woman who managed to navigate our carload from Central Mass into Medford. She read the poem "Scar Tissue" from a chapbook manuscript of the same title, which ends

at the hospital nurses without smiles


without a soft word take over

for days into months

read from a growing group of sea poems, this one with a working title of Pteropod: thecosomata, a meditation on the sea butterfly, a small swimming sea snail. She reported


that she was almost finished revising her manuscript, which had been in process for a number of years and sent it out! 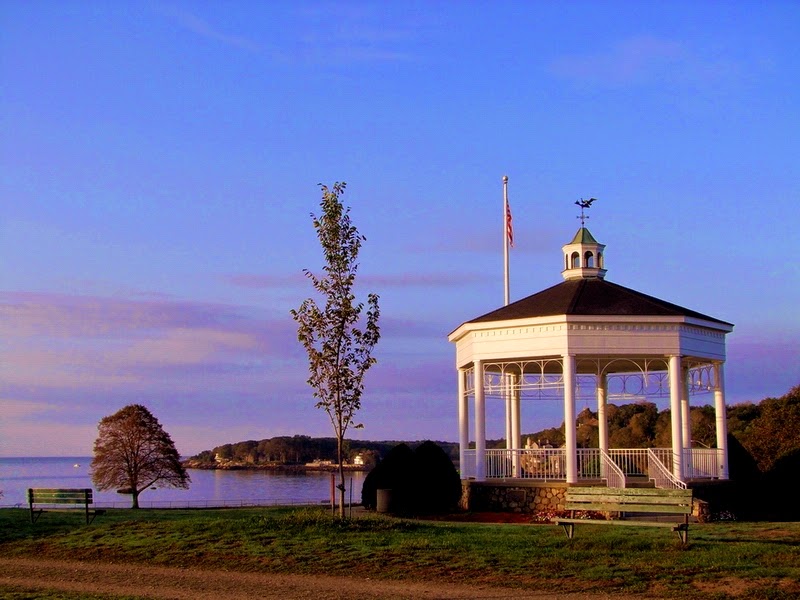 where and how, the group agreed to meet at Fort Stage Park in Gloucester, MA and bring sack lunches, which sacks opened to spill out into a lovely feast in a very shady spot.  Claire Keyes opened the conversation with the question, "What poetry journals do you like, read, subscribe to?" and the women took it from there, each also reading a poem and providing information of our lives' work these days.

MARY BUCHINGER BODWELL
read a new poem titled "The Mulberry," which sparked a sweet discussion, and she named these journals as the one she subscribes to: POETRY and AGNI; and the online journals The Cortland Review http://www.cortlandreview.com/, Right Hand Pointing http://www.righthandpointing.net/, and Innisfree http://www.authorme.com/innisfree.htm.   She just that day had a poem published on a Gloucester-based journal called  Extracts, way too serendipitious not to share. It's titled, "Passage of Time in Paute, Ecuador:"
http://dailydoseoflit.com/2014/07/29/poem-mary-buchinger/

JENNY DOUGHTY
read a poem titled, The new bride serves her mother-in-law Sunday lunch, a delightful parody of William Carlos Williams' "So much depends." She says she has never sent it anywhere and doubts whether anybody would publish it, but we are sure there is an anthology out there that will be calling for it any time. She named as favorite journals The Aurorean, Naugatuck River Review, and Four Way Review. The last of those has some of her poems online, including this one, "The Printer:"  http://fourwayreview.com/the-printer-by-jenny-doughty/ 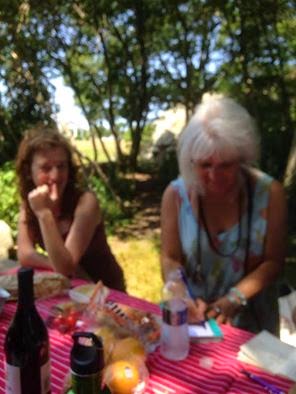 read "Alien Planet." After a long period of working on a memoir, she has returned to poetry and is working on a chapbook with the working title New Astronomy. ( She says, "I like it because it is new astronomy for me, but I don't think it is a final title.")
The illusive Ellen Goldstein is seen here on the left


read an untitled/unpublished poem about teaching poetry to sex-trafficking survivors, to whom Jennifer does indeed teach poetry. For favorite magazines, she named Poetry for its


quality/innovative poems and interesting/provoking prose, as well as the journal The Mom Egg Review. For Mom Egg, she is editing a special themed issue on "Compassionate Action there.


DIANE KENDIG
read "Restoration on Maria Blanchard" and chose Poetry, Field, and JJournal as favorite journals with About Place as a favorite online journal (http://aboutplacejournal.org/). She is the featured poet for the Fall Writers Retreat at Malabar Farm in Mansfield, Ohio September 13 and 14th.

CLAIRE KEYES
read a poem titled "Bracket Fungus" a love poem---or a loss of love poem. The journals she subscribes to are American Poetry Review, Rattle, Poet Lore and Calyx.  And she put in a brief word for Soundings East, the journal of Salem State University.   She urged us all to check it out because it runs a terrific poetry contest. She didn't report that the contest is named the Claire Keyes Prize for Poetry, named after the journal's longtime editor. 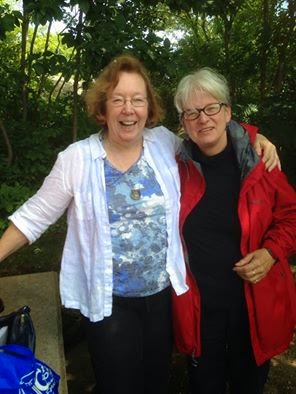 ZARA RAAB
read "Hang Gliders" and named The Dark Horse and Stand (both UK) for their rich offerings in formal verse and the different perspectives they offer.
(Zara and Jenny have been online workshop friends for ages and just met F2F and in this photo, face forward;)

ELLIN SAROT
read another poem that, like Mary's, seemed serendipitous for the day: "Good Harbor, Gloucester, Massachusetts," forthcoming from String Poet. She too mentioned The Dark Horse. She also initiated an animated discussion on publishing ekphrastic poetry.

ROSEMARY STARACE
read “Why I Need the Sea” and named Poetry for its wide availability and excellent website and APR because often publishes groups of poems by the same person and has excellent essays and likes its format, large and newspaper-ish, informal and expansive, but hard to store. She also admires the online journal, Yew— "innovative writing and images by women” found here http://yewjournal.com/


(Thanks to Jenny and Jennifer for the pics. Regrets that we missed snapping Mary. Next time. Here's to the next time, Womponies!)