On arriving here in Northeast Ohio, I have found that hole filled by one of the world’s smallest bodies of water, Sippo Lake, which I once described as "no bigger than a tiddleywink." When I was a child, it anchored my world, the woods across the street where I played, either alone or with the next door neighbor, Richard Barrick. Together, we stumbled upon a stone foundation of a deserted farm. We picked huckleberries and wild blackberries. We found a street sign that someone had stolen, and we proudly reported it to the roads department, which said these signs were very expensive, and they appreciated our assistance.  In winter, Richard (who is now an architect), along with the Schott boys, built a ramp on the hillside in the field directly across the street from our house, and we all flew our sleds over it, sailing into the air, back onto the snow, crashing into the brush, or, on some long, lucky rides, coasting almost to the edge of the lake.

﻿﻿
﻿﻿Recently mentioning Sippo on Facebook, I learned from Steve Carter, a high school acquaintance who now lives and works as an actor in NYC, that he and a friend had been adventuring on the other side of the lake at the same time. Steve wrote:

Sippo Lake and around it were very major in my childhood. From age 5 to jr high I lived at 322 Westland Ave on the Sippo side of Lincoln. I had a friend, Alan, about a block away. There was a big apple orchard behind his house, beyond that lots if woods and Sippo. Be assured it was explored extensively, parents and school far from sight.
But if Sippo Lake in its wild state was a childhood blessing for Steve and I, it also held dangers. Steve recalls nearly falling into the lake in winter, on a day when it seemed solider than it was. I recall walking on the ice along the edge in my skates, only to sink into slush. And on our side of the lake, a neighbor boy was drowned there ice skating one winter. I wrote about that very early on in my writing life, and the poem was only recently published in a wonderful on-line journal called qarrtsiluni. You can hear it read by Beth Adams, who recorded it for me, here, along with their edit of the poem. Mine is below.
Steve provided this map of Sippo. (He lived on the Genoa Road side. I lived on Perry, near Second Street)  If you look very closely at the map , you can see a light gray line that goes from Tyner Road, edges fairly close to Arrowbrook, and ends up in a parking lot. It's the path that I walk nearly every day these days.
What has happened to Sippo is both wonderful and sad and began happening sometime in the early 1970s. My sister Daun  and I were home from college when we heard, coming from across the street….bulldozers. We ran to the living room window to see the tall oak tree there go crashing and crunching to the ground. It must have been the weekend because Dad was home, and we turned on him shrieking like sirens, feeling betrayed by our resident Zoning Board member.
“Kids,” Dad began his defense, and using the collective noun he still uses for his gang of four: “It was going to happen. People were going to build. What we have managed to do is see that the houses they build are good ones, no crap. And we have managed to keep Sippo Lake public. There will someday be a park there." 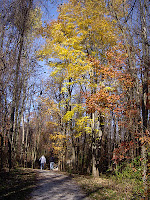 And there is. A park I love almost as much as I loved those wild acres I roamed. The paths are curated and measured and their distance posted for people who walk 100 miles from May to October and then get together to celebrate their fitness. This fall, the walk through woods and field have been gorgeous. 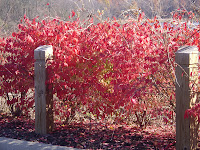 And for school children who arrive in busloads at the “Exploration Gateway” where there is a library and a nature center, with park rangers. At the closer end of that path, just a half mile from my door is a marina that sells bait and rents small boats. And the little dock and boathouse that my dad and Orion Evans built has been replaced with two big docks, a clubhouse, two picnic shelters. In winter, signs are posted when skating is not safe.
The houses across the street from me are nice enough. Much bigger than ours. They face the lake and not our street, so it’s not like having neighbors… and the few times I have walked there, I haven’t encountered much neighborliness either. They had large, expensive Halloween decorations, so I can only imagine what the Christmas lights are going to be like, but I have light-blocking blinds. The sledding hill is gone, too, leveled in the process of erecting these houses.
Still, Dad was right: we did get something for the trade. We traded our wilderness for some homes, some nature, a library, and a woods with paths. The library has a big picture window that overlooks the lake, and free wifi for a fair number of people who don't have their own. Ditto computers. And Steve will be glad to know that occasionally, when I am walking, kids come crashing out onto the path from wherever they have been roaming, as do deer and rabbits and feral cats, clearly from places where there are no paths. So, while there may not be as much wilderness for them as there was for us, there is enough for them to get away from parents and school. And, I would add, from the computer and the mall. For that, I remain grateful, for them and for me.
----------------------------------------------------------------

No larger than a tiddly wink,
and pushed to its end,
it would leave only a mist,
land empty in the smallest cup.
Still, it claims our attention.
One winter a neighbor boy drowned
under the shrunken flat white disk;
often summers when nightfall
renders the sky all colors,
mirrors two worlds from one,
sun running over
I can still hear his mother say
she lives by that light.