Marchers Continue to Reflect, to Act... to Continue 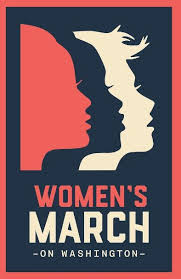 "We are mothers. We are caregivers. We are artists. We are activists. We are entrepreneurs, doctors, leaders of industry and technology. Our potential is unlimited. We rise." - Alicia Keys


The big question after any march is what will come of it. Was it just another feel-good party, or, like an earthquake, will its reverberations go on indefinitely. Six participants answer my question: two weeks later, what does it mean to you now?

Kathleen Welsch, back in PA after D.C.

Returning from D.C., I was energized. How could I not be when the crowd was so positive, when at the end of the day marchers tumbling out of trains to meet their buses filled the cavernous station with cheering, chanting, fist-pumping, and smiling faces. That sense of comradery was echoed by one young woman in our group: “After the election, I felt so alone. Now I know there are others just like me.” We were members of the popular vote that didn’t count but had certainly found each other and made our presence visible. 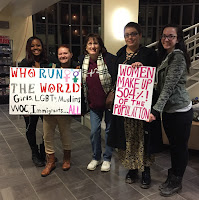 Traveling with a new generation of strong young women and men gave me a sense of hope. I couldn’t help but remember my own first march long ago: there were no men on our bus. I don’t remember any at the march either. But this time both young women and men came prepared with their signs and passion. I saw a little boy with his mom in D.C., marching with his arm raised and fist clenched. For me the march wasn’t a one day event: I continue to call my representatives and am involved with local fellow marchers in establishing "Indivisible We Rise - West Central PA."


﻿
As the cascading events of this past two weeks have unfolded with one oppressive executive order after another – starting with an assault on women’s rights to sound medical care and the authority over her own body, it has been heartening – even awe-inspiring to see the number of people actively resisting. At the same time, though, I have to admit I also feel a sense of frustration like a low-hanging dark cloud. Why is it always such a battle to achieve equally, recognition, respect, and basic human decency?

Carole  Elchert, in OH after D.C.

Here are just two of my "best remembers" of the 2017 Women’s March on Washington:

1)  A line of women, obviously our elders by their walkers and grey hair, wore a strip of photographs across their chests that revealed images of their great grandmothers, grandmothers, mothers.  For me, each one represented the lifespan and history of the moment, so I asked them why they decided to march, recognizing the physical difficulties and discomfort they were determined to overcome.  The grand leader replied:  "Why are we still marching for our rights? I consider this march the last one we should have to put up with.  Make sure of that,” she said to me.  How do you ignore such wise counsel?
2)  The police/security officers—many of whom were black women—directing the crowds that packed the Metro would give out a splendid cheer of “hurray,” inspiring the crowds to chant with them.  The subway tunnels were turned into an awesome echoing chamber of jubilation and reverberating human voices.  If the March had recorded those underground sounds, we'd have the soundtrack, which would surely move Congress to pay attention to the voices of the people, finally.

And now? Already, our Findlay/Bluffton group is organizing a Standing Rock demonstration in front of Marathon Oil Corp head offices in Findlay, OH.  I was again inspired by the number of University students from Bowling Green and the NW Ohio area as well as Native friends who participated in a street stance for the protection of the Earth.  I call these activities, “Earth Witnessing” efforts to commemorate Siddhartha Gautama’s gesture-mudra shortly before he attained enlightenment.  My wish for the millennia is that humans develop an enlightened, planetary Worldview, one that dismantles nation-political borders to achieve a species-wide, Worldwise ethics for every sentient being, as the Buddhists say of all and everything.

Rosemary Starace, with the community in Pittsfield, MA 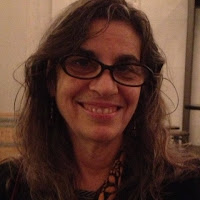 Before and after the election, inauguration, and Women's March, I grew increasingly upset with political conversations, news, and even calls to action. Since the March, I have unsubscribed from WOM-PO (after 11 years!) and withdrew from Facebook by deleting the app from my phone and iPad. (Now I look at my notifications once a day on my computer.) I want to find out how my life is without (much) Internet and to discover my own response to the frightening situation we are in. I have written notes to Congress on a few of the million issues we face and I find that terse declarative sentences and short quotes from  poems make me feel strong. Will anyone read them, and will these tiny actions have an effect? I also want very much to respond with art and writing and to be able to share the same in a meaningful outward-reaching forum.
In terms of the March itself, I find myself very inspired by Aja Monet's poem, “My Mother Was a Freedom Fighter,” so lush and fierce, which she recited at the D.C. March and which I witnessed sitting in the Colonial Theatre in Pittsfield with a thousand others.  (I have pre-ordered Monet's book of the
same title, which is coming out in May.)

"A movement is much more than a march. A movement is that different space between our reality and our vision. Our liberation depends on all of us." - Janet Mock

Peggy Nelson, in CT after Boston

I am still feeling empowered from the march.  And of course lots has happened from the Whitehouse that makes my commitment strong.   I've been calling my senators and congresswoman about issues as they arise (mostly to say thank you because they're amazing!) and have made phone calls to out of state senators as well.  I plan to stay active and connected  so I can keep going at this crazy world that keeps unfolding. Each time I tell the story of my experience at the Boston March - as I did the last few days while in Vermont with one of my sons - I feel the energy. And, like you, I will be donating to the ACLU and Planned Parenthood.

My thoughts about the march:
Marching alongside thousands of others representing countless causes was inspiring, empowering, and showed me that there's still hope. Seeing so many people from tiny villages, to big cities across the world standing up and walking in solidarity against all that is wrong about this administration, confirmed for me that we really do have legitimate concerns. Millions of people can't be wrong. We aren't whiners. We are genuinely concerned about the future of America and the tsunami of trouble that could be felt around the world as that bully and his Ikea-quality cabinet continue to wreak havoc on our constitution.
I will continue to march on, more resolute than ever.

"Remember, the Constitution doesn’t begin with, 'I, the President.' It begins with, 'We, the people.'" - Gloria Steinem

So, post-march, I have hope and it’s grown stronger in the aftermath. I have made calls, sent postcards, and joined 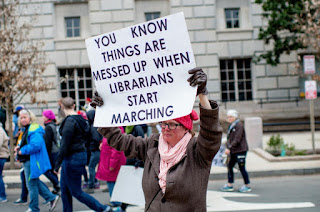 a local group called "Action Together Lakewood Area."  The meeting I went to had so many people that the restaurant had to keep bringing in chairs.  I can listen to and read news (which I couldn’t do from 11/9 to 1/20), though I have nearly weaned myself from TV.  (I cut my cable back to about a dozen channels, so I don’t have the 24-hour news channels anyway.  But, post-election, I quit watching and now hardly ever turn it on.) My mother gave me a subscription to The Funny Times, which is the print equivalent of the weekly Saturday Night Live. I re-subscribed to The New Yorker on Inauguration Day, mainly because it employs Andy Borowitz and has smart commentary on contemporary events.


I know that I’m not alone, that the world hasn’t lost its mind, that not everyone has drunk the Kool-Aid. There’s so much more I could say but you get the idea.  I’m sorry that you experienced negative blowback.  I haven’t any firsthand knowledge of that. But I’ve got to say that it’s caused me to rethink many of my acquaintances.  I have only one close friend who isn’t rabidly up in arms.  My extended family (aunts, uncles, cousins) are DJT supporters, but they’re a lost cause.  I have found that I have exactly 2 first cousins out of about 20 who didn’t drink the Kool-Aid either.  One is a doctor’s wife with 4 boys and she just took her boys to their 1st demonstration against the immigration ban.  I am so proud of her.
I warn you, that's the way things are:
This is my final lifetime.
--Anna Akhmatova

Posted by Diane at Wednesday, February 08, 2017 No comments: