Hating Heckling Hazing Even If No One Dies of It

A friend recently noticed that I did not list my undergraduate college on my Facebook page. “That’s right,” I answered, “And I am not going to.” I hadn’t thought much about the decision not to list it, but since I have to list it on my resumé, I have recently been thinking a lot about that decision to leave it off elsewhere, about my ambivalence to my first four years of college, especially the first.


*****
The small private Midwest school had been my dream choice, made possible only with a generous financial aid package, based on my test scores, my hard-earned grades, and the financial need of being the oldest of four children of a factory worker and a stay at home mom. I was so happy to be able to attend there, and I imagined it would be a real academic experience, unlike our sports-crazed high school. I was excited to be living in an old dorm with two big rooms for my three roommates and I. We all wrote each other that summer of 1968, excited at the upcoming trimester.

And then I arrived on campus, and I found in my packet of materials, instead of the laptop 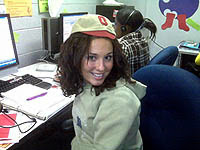 students these days receive, a maroon cap, referred to in almost reverential terms, both then and now, as "a beanie, an important tradition at this college." This cap was my first personal introduction to the experience of hazing.

Not my first knowledge of hazing. That came in junior high, when I learned that the ninth grade choir required an “initiation” that involved demoralizing and uncomfortably disfiguring (though not physically endangering) rites such as having rotten eggs rubbed into one’s hair while wearing diapers and having photos taken of the embarrassment. This was all in good fun, as they say, under the auspices of the choir director, an adult of the type my sister and I used to call “Friend to the Teenager,” adults who cared more about being friends than being adults, who were into all the gossip about who was dating whom and what we thought the hottest rock song was. Fortunately, I didn’t make choir but was in band, and our band director, who was not a “Friend to the Teenager” but a musician and hard worker, would not allow any such thing.
I had no idea that college would involve any such thing before I arrived on campus, so I was surprised by it, and though I had reservations about the process so great that I could have been a Hilton Hotel, I was assured by all the administrators (most faculty were not so keen on it either) that this was going to be great fun! All first year students were to wear the beanies at all times so everyone would know we were “frosh.” But not so they could help us make any adjustments. No, so they could scream across the street or in the frosh face, “What’s wrong with you frosh? Can’t you wear that beanie right?” or some other supposedly mild demeaning insult. Whatever you answered to that was wrong, and many upperclassmen expected you to answer respectfully by saying “Yessir” or “Yes ma’am,” as though they were your drill sergeant. Many screamed like drill sergeants. I was not accustomed to being screamed at.


And it wasn’t just on the street. I recall one particularly odious sophomore woman who was attractive  , with long, straight hair which would be the envy of any 20 year old today and a large-nostril nose, a bit, I have to say, pig-like looking. She worked in the cafeteria, and every time I came through the line where she was dishing up salad, she’d harass me: “Better get that beanie pulled down, frosh!,” “What did you say, frosh? Don’t you mean, ‘tossed salad, please ma’am’?” I would try to case out which line she was on and go to any other.


I just wanted to blend in, not be called out, and to wear a beanie meant to be called out, without warning, at any time. And if one chose not to wear it? One was called in. A committee appeared at one’s dorm room, with the threat of a formal hearing if one did not wear the beanie.


I know, I know. This was all meant in fun. Over and over, I was told what fun this was. And I know it was not the alcohol-abusing, death-defying harassment perpetrated by Greek organizations. However, it was campus-wide, it was perpetuated by the adults on the campus, who quashed any complaints by repeating how much fun it was, how it provided a bonding experience that nothing else would. How it was a cherished college tradition that freshman had endured for decades for the first six weeks of school, after which there was a big bonfire, which freshman had to build and circle around in the dark, and then the next day, presto, change-o, we didn’t have to wear the beanies any more.


Our parents were told not to let us come home during that six weeks. My parents would have let me come home any way, but I was determined to try to fit in and get invested in my studies, which I loved. But any time I was outside of class or my dorm room, whether in the library, at meals, or crossing the street, the hazing could begin and I spent the six weeks with my stomach in knots most of the time, waiting for the next small public humiliation.


I have to say, for me, and for many freshmen I knew, it was not a bonding experience. Two of my three roommates left at the end of the year, and I was becoming distressed at the college’s general emphasis on amusement over academics. And while I am relieved, I am not amused today to read on the college’s website that “Hazing is not a tradition….Hazing is not a ritual,” which I was told in 1968 over and over again that it was both.


Still and all, I hadn’t thought about that very stupid hat for a long time, until I read Kim

Stafford’s latest book, 100 Books Every Boy Can Do, explores his memories of his older brother, Brett, who committed suicide in middle age. The book is written in part for what can be learned from the brother's life and death.  It happens to touch on Brett’s experience with freshman hazing at Grinnell College. Brett hadn’t mentioned it to his family at the time, but Stafford recalls now that years later, when helping his brother create a new resumé, Brett refused to list his year at Grinell. And after his brother’s death, Kim learns while visiting Grinnell that terrible hazing incidents were delivered up on the freshmen during Brett’s freshman year there, especially on the men. Kim writes:


I understood that my brother, though a year older, was always too young, too tender, too much the saint. Those were the years of Vietnam, soldiers, a kind of free love for which my brother’s Midwest heritage had not prepared him, and his first long departure from home into a world he could not manage.


No one in my family would ever call me a saint, but my mother had always said that I had her father’s tendencies to be overly self-conscious, and that nails why the hazing was such a trial to me. I wanted to come to college and quietly succeed. I felt self-conscious enough as it was, some of it due, I now realize to being a first generation college student. I did not need someone to be shouting out my difference from all corners of the campus in sudden, unexpected times, and with disrespect.  I could not manage that place. But I came to feel that I had to if I were to graduate from college, which I wanted to do more than anything. The first in my family to go to actually obtain a degree, I felt that fitting in was very important to succeeding there. I was wrong and eventually found other cockamamie unfitting profs and friends, but not that first year.
After the initial beanie experience, all the hazing on that campus came out of the Greek organizations, and I knew I would never join one. However, at that time Greek life (to use an oxymoron) was the only life on campus. By the historical account now at my college’s website, 80-90% of the students there in the 1960’s belonged to its local sororities and fraternities. I had excellent grades and when pledging offers came into me at various times from four or five of the six sororities on campus the Dean of Women Students, definitely a “Friend to the Teenager” type, called me in three semesters in a row to ask why I didn’t want to pledge. If it was dues, she offered, the college could help me out with that. Every semester, I would say no thanks, politely, and not get into debates with her, but if I had, I would have told her that in addition to the hazing issue, I thought sororities were against everything I had learned in church about loving everyone (and not just the ones with enough money to be in your club). But then, I lost a lot of my religion at that church college.


However, I could not transfer. At that time, a transfer student would lose financial aid for one year, at least lose the government student loans that LBJ’s “Great Society” had worked for kids like me. It had seemed like an enormous gift as I headed off to college, but when I tried to transfer, it became my golden handcuffs, binding me to the college in ways the beanie did not. As the oldest of four children, I had a sibling coming along every two years, and I could not afford to lose a year of financial aid. By my sophomore year, I went into home mode, heading the two hours back to my parents’ house every other weekend, battening myself down with my studies on the off-weekend.
*****
I eventually graduated and continued for years after to be overly self- conscious, to experience bouts of depression and even suicidal tendencies that I am now happy to have left behind. And while I don’t think those first six weeks of college damaged me forever, they did alienate me from the college where I had to spend the next four years, and left me totally opposed to hazing in even its mildest forms. I know many people find such private and public humiliations fun, especially with the thought that in the coming years, they can be the perpetrators rather than the preyed-upon. Such people believe that I am quite the spoilsport.

And I know that hazing has been reduced today, purportedly even at my undergraduate institution (which I will never be able to call my “alma mater.”) But I also know that the emphasis has been on preventing physical harm, since that leads to death, which is so messy for colleges to clean up after. Hank Nuwer, a professor at Indiana's Franklin College, who wrote "Wrongs of Passage: Fraternities, Sororities, Hazing, and Binge Drinking," when asked his opinion on bringing beanies back said to The Christian Science Monitor, “No one ever died from a beanie,” and stated that keeping such a tradition was just a great way to build solidarity. So even he, the expert on hazing thinks it's just fine to bring back the old humiliations.


I beg to differ. While few if any people have "died from a beanie," death does not have to be the only reason for getting rid of traditions that involve the harm and humiliation of any kind of hazing, including enforced hat wear and all the heckling that goes with it.
Posted by Diane at Wednesday, October 09, 2013 No comments: