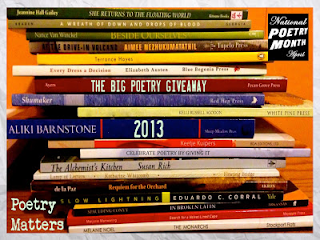 For National Poetry Month, I am participating in a giveaway of my favorite stuff, poetry. By the end of April, you can win one of  three books, just by posting a comment here at my site. While I hope that my poet and writer colleagues will post, I'd very much like to hear too from old and new friends who don't much read poetry.  Here are the three titles (ta-dah!), followed by info and links to each book

***The Places We Find Ourselves

I've been fascinated by the online collaborative work at renga over on the Cleveland Poetics this past autumn raging into and through winter. So I am hoping that some of its poets might be interested in this hardback collection edited by the inimitable Bob Holman and Carol Muske-Duke. It includes fifty-four poets "responding to ideas of America-- and to one another. Among them are Heather McHugh, Adrienne Rich, Phil Levine, Cleopatra Mathis, and David Baker (who lives in Granville, Ohio).

This book reflects on the lives of prisoners, Latin Americans (including my favorites, Nicaraguans), immigrants, and other heroes, as well as Espada's own life from childhood to his work as a tenant lawyer and legal advocate to his current work as poetry professor at U Mass Amherst.

For my money (and I have bought two copies), this Espada's best book to date.  He is reading in Northeast Ohio for National Poetry Month, and with luck, I will get this hardback copy of the book signed for you.

The Places We Find Ourselves, is 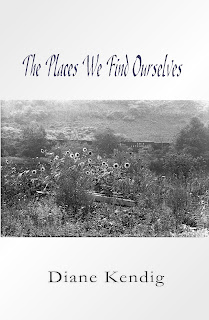 my third chapbook of poetry, spread across my 30+ years as a poet. During those years, I worked teaching, with the most years, nearly 20, at The University of Findlay, where I started a creative writing program that included a writers series both on campus and in prison. After that, I taught for a decade at Bentley University in suburban Boston, and currently, I am back in my hometown of Canton, teaching sporadically as I help to care for my father. Some places in my book are on the map, such as first poem set in Ohio, and the last set in Massachusetts. (Also there is a wonderful place just outside of Cleveland in the great cover photo by Steve Cagan.) But the book is more about the places in our heart these places leave, as the Irish poet, Seamus Heaney wrote, standing at his mother's grave:

And we all knew one thing by being there
The place we stood around had been emptied
Into us to keep.

Here is the last poem in the book written after I had moved to the East Coast following the death of my sister after her two year struggle against cancer.


I came to this point three years ago.
Last winter, early morning on the beach,
I heard dog walkers argue how it looked.
One swore a chunk had moved, or a new one, risen.
The other said no, old outcrop: he’d bet a quarter,
staking his claim on Egg Rock’s being
“stable, solid, everlasting,” the way the poets
saw it in the first one hundred fifty years

of Egg Rock poetry now on the net.


Plath must have stared long at it, too,
from south of here in Winthrop, and she
used this site twice as backdrop for a suicide,
seeing a stony godlessness that doesn’t
give or take the riptide, just sits it out.
I can’t weigh in with her certainty or on the walkers’
wager--or Pascal’s. I’d like to know
I could cash in my chips as gamblers do these days
on “Horizon’s Edge” casino cruises pulling into harbor.


Then I view two centuries of online Egg Rock art,
and from the antique paintings, I’d have to say
the rock still looks the same. Oh, I know
the lighthouse keeper’s dog Milo and the near drowned
toddler in Landsmeer’s famous Saved are gone—
or as my friend Marion, who survived cancer says,
say it: are dead—along with swimmers who didn’t survive,
but the rock, I mean, the rock still looks the same.


Art tends to make me feel more hopeful
than life without art would—in fact, sustains me,
but from my second story window this rock itself
could be a new grave, cairn, or egg. Low rider,
close to this earth, it could go under any moment
in a nor’easter or a blast. Lovely loaf in the Atlantic,
it glitters and streams the light’s uncertainty,
all I had before coming here, too.

Leave a comment here on  my blog (see below) and you will be automatically entered in the Big Poetry Giveaway. I'll draw three names on May 1st and announce the winners shortly after that. You needn't have your own blog to enter, just a comment! I will mail the books to the winners, free, no postage, no catch.

Interested in more poetry give aways? Check out the lot of them here:
http://ofkells.blogspot.com/2014/03/big-poetry-giveaway-2014-celebrating.html

(**To Subscribe, go to the very bottom of this page, and click on Subscribe to Posts. This is not necessary to win.)
Posted by Diane at Saturday, March 29, 2014 47 comments: 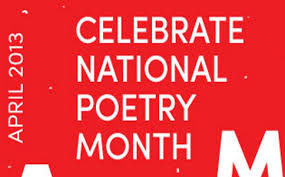 If I don't hustle over to my blogs any other time of year, I manage to get there each year for National Poetry Month, which is April, but this year, I have just gone, as my father would say, whole hog. Here is what I have up for the coming month:

*****LINKING TO THE CCPL SITE
First, I helped the Cuyahoga County Public Library with a Northeast Ohio- focused website for the  month. After intense weeks of contacting poets, getting rights, getting photos, and researching local literary history, I created along with librarian Laurie Kincer, an online site that will feature a daily intro (with news and artful connections), a poem and its poet, a writing prompt, and a link to a poetry site. The official news on that project will go out on March 25th, and the first day will be Tuesday, April 1st-- no fooling! If you'd like to get a daily email reminder (and be registered to win two free tickets to a Robert Pinsky reading April 8th), use this link.

*****BLOGGING ON READINGS
The CCPL site features three nationally-acclaimed poets who will be reading here in Northeast Ohio this spring: Robert Pinsky in Cleveland on Tuesday, April 8th; Ted Kooser in Kent on Thursday, April 10th, and Martin Espada in Kent on Thursday, April 22nd. And throughout the month, there will be Northeast Ohio's steady stream of readings on campuses and in cafes, listed in the terrifically useful calendar at Cleveland Poetics. One in particular that I would like to mention now-- is Joshua Gage's "Ohio Poetry" series, which will feature Lisa Szporluk on Thursday, April 10th. During NPM I'll be attending as many of those as I can and blogging about them, as I did the Merwin reading in Kent a few years back.

***** "The Big Poetry Giveaway"
I am signing on again this year to the project where people are encouraged to respond to poets' blogs, and at the end of the month, responders are eligible for drawings for free books. That begins this Thursday, March 27th, hosted by the West Coast poet who originated the give-away, Kelli Russell Agodon. As always, I try to give away some other surprise in addition to the two books, and I will again this year on April 22nd. Check back here on Thursday to see what!

*****POP (Past Ohio Poets)
One of my projects for the library was to research 8 deceased Ohio poets whose poetry presence lives on. At the last minute, this feature had to be cut, but as Sylvia Plath once said, "For the writer, it's all grist for the mill," and I will be turning that floss into gold here. Find out where you can find graves, homes, and poems of famous Ohio poets.

I am well aware that NPM has its detractors; one is Cleveland-born Richard Howard, who feels it "trivializes the art form of poetry." I don't know about that, but I will say, Laissez les poesie bons temps roulez!
Posted by Diane at Saturday, March 22, 2014 No comments: