Rock and Roll Hall of Fame: Where are the women? BUFFY SAINTE-MARIE

Guest blogger Paul Beauvais in his continuing series on women who belong in the Rock Hall of Fame:

I understand why the Rock Hall ignores Buffy Sainte-Marie. No doubt they consider her too "folkie." Hell, she recorded for Vanguard, so there's no way that she can be a rocker, can she? Ignore that the title track of her first album, "It's My Way," is a song that I can easily imagine Bruce Springsteen or Eric Burdon covering. Ignore that "Cod'ine," another song on the album, was covered by Joplin, Quicksilver Messenger Service, and Courtney Love. And, of course, Donovan covered "Universal Soldier," a great song, but back then he was still a folkie, too. And, if being a folkie wasn't bad enough, Sainte-Marie also penned "pop" songs: "Until It's Time for You to Go" and "Up Where We Belong" (for which she won an Academy Award). So of course she doesn't belong in the Rock Hall. But guess what? The older she gets, the fiercer her music becomes. She's put together a band that can rock her old catalog, and her new stuff sounds powerful and fresh.

Check out this duet withTanya Tagaq, an Inuk throat singer:

And this, Buffy Sainte-Marie at Power In The Blood, Polaris 2015 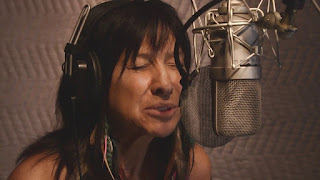