On October 15th, the Rock and Roll Hall of Fame published this year's nominations, 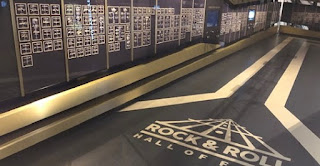 Over the next two weeks, Paul wrote several posts on why he thought some specific women in particular deserve to be in the Rock Hall. He also articulated why he thought the issue was worth discussing:

"I've posted quite a bit about the Rock Hall in the past week, and I imagine that some of my friends are wondering, "Why bother?" It's a fair question. The very idea of a Rock HoF seemed suspect to me when I first heard about it. But experiencing the Hall in person has led me to appreciate having it nearby. I've heard good music performed there. I've attended informative lectures. I've enjoyed some of the special exhibitions (particularly the "Women Who Rock" and "Summer of Love" displays and the John Lennon memorabilia). I've seen the Hall evolve (for better and worse), at times trying to curate an experience that provides a coherent narrative of rock history and at other times settling for being incoherent but in a fun way. As rock itself diminishes in cultural significance, the Hall will, too. But I hope that it still finds a way to be an important part of Cleveland's cultural scene."


In order to give Paul's posts a larger audience, I asked if I could collect them here, and he gave permission, so I will be posting one of these a day for the next week.

Already the Melissa Etheridge fans have "liked" his defense for Etheridge, and we can hope that other fans will speak up and out for the seven women artists he has discussed and others he has named. Maybe even the Rock Hall committee will listen. For next year.
Posted by Diane at Monday, November 04, 2019