A NOVEL IDEA FOR NaNoWriMo: WEEK 1


As I mentioned last week, I am encouraging poets who have not yet written 30 poems in 30 days to do so this month while in the company of writers hard at it for National Novel Writing Month (NaNo).  And to help you along, I plan weekly to feature a link to a daily prompt, to poet-related NaNo stuff, and to an interview with a poet who used these prompts last spring.

Nov. 1 Beginnings: Write a poem about a first in your life, such as having a first child, first looking into Chapman’s Homer, or tasting a cannoli for the first time. Do not use the word “first,” “one” or “beginning.” Do not use the phrase “for starters.”

Nov. 2 - Create a spine poem by stacking up books with appealing titles from your bookshelves. Arrange them, spine out, to form poems. Take a photo to preserve your literary remix. If you’d like, share your images on Twitter with the tag #readwritepoetry and #spinepoem or #spinepoetry, where you will also find examples. (Thanks to Laura Weldon for this great idea.)

You can find these two prompts at the "Read + Writer 30 Days of Poetry," here.

This week's news comes from Cat Russell, this week's featured poet. Cat is also taking the challenge to write a novel this month. She believes the NaNoWriMo site provides a lot of information, encouragement and connection for participants. She says, "If you register at the NaNo site, it's free, you can access everything." (See the NaNo link above.) She notes that even poets who don't want to write a novel can register and sign up for the Discussion Forum titled "Rebels," and she says "the biggest difference is if you rebel you can't win the sponsor prizes. Otherwise, you can do anything you like."

Prizes? Prizes? We don't need no stinking prizes. Or badges. Or nothing. Just bring on the prompts and viva la company! 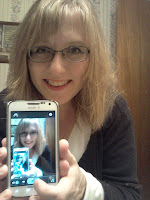 I'm an author living in NE Ohio. My work has been published in the 'Best of Friday Flash – Volume One' and 'Volume Two' anthologies, Lightning Flash magazine, and Flash Me magazine. I share my life with my high school sweetheart, our son, and assorted creatures in the Wilds of Ohio while writing short stories, producing poetry, and learning more about the craft every day.

More of my work can be found on my writing blog, Cat Russell,  at catherinerussellwriter.wordpress.com

Q: Could you tell us about yourself as a poet? How long have you been writing poetry? How does it fit into the rest of your life?

A: I've written poetry off and on for several years now.  I've been heavily involved in the online #FridayFlash community via Twitter and Facebook, so I generally write one piece of short fiction a week. Writing a complete story with few words means knowing how to pick the right ones, cutting out excess, and focusing on what's most important.  That's what I like about writing poetry. It allows me to practice that same type of crafting while breaking the rules of prose.

Last year I joined a monthly Poetry Workshop through Lit Cleveland, and that's really helped expose me to new poets and approaches I had not known before. Between that group and the Cuyahoga Poetry Month prompts, I've gotten much more heavily involved with both reading and writing poetry.


Q: How many of the three years have you used the CCPL prompts?

A: I've used them every year, and I love everything about them. I get great recommendations for new authors, inspiration for my own work, and get to read one poem by a local poet each day.

Q: Do you know anyone else who has been writing to them?

A: I know one other person that has used the prompts, as well as several online participants through social media.

Q: Are there any of the prompts that seem to work better for you? that don't work?

A: There were a few prompts that were timed badly for me personally this past year, such as writing about things that occurred on certain days. Others I haven't written yet, but saved the prompts for later use. However, I found most of the prompts to be very helpful and have started submitting some of the poems they inspired. Mostly, I find the daily ritual combined with the posted poem to be a great creative boost that makes me want to write. I'm especially fond of the prompts that introduce me to new forms--such as six-line fibbonaci poems.

Q: Have you presented any of the poems in workshops or readings? Have any been published in print? (If so, can you provide titles and/or which prompts you were writing to?) Have you gotten any response to those particular poems?

A: This year, the poetry prompts came at a particularly turbulent time in my life, so they provided a much needed emotional release. I have shared a few with favorable results, but some are still being worked on or are too personal to share right now. I have submitted several for publication, though I have not heard back on all of them yet. (P.S. I actually have sold one poem written to the prompt to write a poem that consists of a single, long sentence. :)

Q: Would you like me to publish or republish one of the poems? Please keep in mind that most journals consider blog publications as publications, and I don’t want to get your prize-winning poem disqualified for having been used as an example on a blog.

A: Thank you, but I'd rather not. I've published them on my blog in the past which reduced their marketability. This year I restrained myself, and I've gotten two sales! (not direct responses to the prompts but rather written as a result of being in poet-mode as a result of consuming so much poetry in April.)

All best wishes to Cat for her poems and for her novel writing month, and to all you novelists, poets, and rebels.