Rawlins: the Good, the Bad, and the Bedbugs 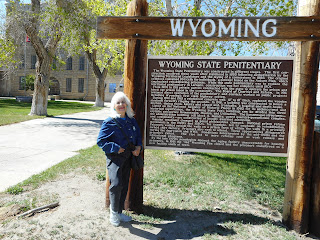 We drove to Rawlins and checked into our  Microtel, a chain I have never liked and the desk clerk was surly, but it is now advertised as Microtel Inn & Suites by  WYNHDAM, and the room looked cleaner and nicer than any I've seen so I thought, "Wow, Windham has really cleaned these places up." (Music suggesting foreshadowing or hubris or something) 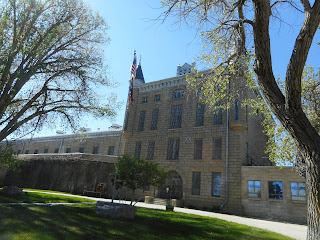 But we left the room immediately as we had come for the Wyoming Frontier Prison. Having taught in a medium security prison for 18 years, I always stop in on prison tours, hoping to figure out criminal justice in America. So far, no. And we have our own history with Wyoming prisons. On our first cross-country trip to California in 1988, our car broke down in Buford, and we were towed to Laramie, where the part wouldn't be available for days, and we had, uh, time, to tour the U of WY archaelogical dig at the nearby former Wyoming Territorial Prison. So 30+ years later, we thought we'd get another perspective.

However, when we arrived, the last tour was over. So we took our own walking tour of the grounds 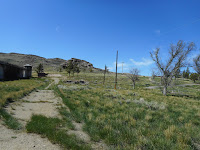 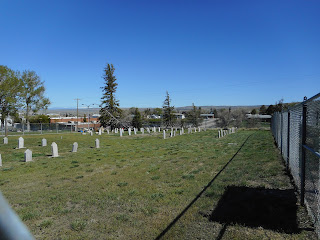 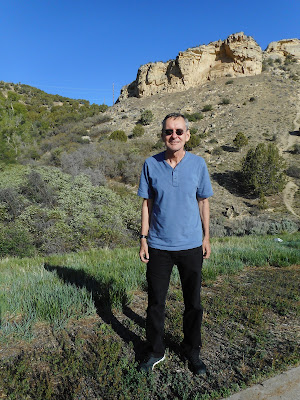 We went looking for food and scored a great find on the main drag in Three Fiddlers, "elevated American food," which was really good bar food PLUS, meaning Paul could actually find vegetarian options. Out on the expansive patio, families with children had apps and drinks after work, a table of retirees laughed. Comfortable. We met one of the owners, who told us the family's long travail, having had property in Montana, lost it (not financially but familially), moved here and opened the restaurant, only to have a huge fire. And Covid. But now they were open on an expansive patio and doing well. They are not musicians but have the surname Fiddler. And we spoke to a Fiddler-in-law.

TERROR IN THE NIGHT

Back at the motel, we fell asleep early and at 1:30 a.m., Paul shouted, "Turn on the light!" and slapped the side of his face-- where he smashed a bedbug who left blood. We were horrified, looked at it to make sure, looked for others, looked to see where we had stacked our luggage. Paul went to the desk, where our surly clerk said they had no other rooms available. 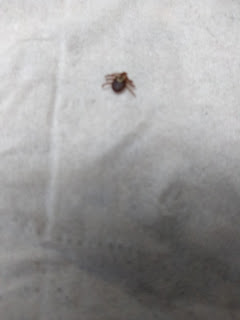 Paul said we were leaving, but first, he wanted a refund. The clerk handed him AN INVOICE. Paul noted that this showed that he had paid them. That's right, said the surly clerk. You made this through a third party (Wyndham), so you have to deal with them. Paul went to check: our reservation was with Microhotel Inn & Suites by Wyndham, but it was 2 a.m., the clerk was not budging, and I wanted OUT. If our reactions seem out of proportion, please talk to someone who has been infested with these. We took the precaution of putting our motel suitcases in the trunk, everything else in the back seat.
My intrepid driver hit the road. "Drive, he said,, also saying we would  sleep at a rest stop. "They will arrest us," I whined, but when we stopped about two hours down the road, I saw carloads of male Millennials, hoodies and masks pulled over their faces, snoozing away. We tried for an hour but we were too wired, and just DROVE.
The good news is that the bedbug seems to have been alone and hadn't laid any eggs. "So far," and as Heather McHugh says, we mean, "So long." The bad news is that Paul has spent hours on the phone with Wyndham, which says we must deal with the Microtel. He has called them again. He awaits payment. I await hell freezing over.