The University of Nebraska and Willa Cather Country 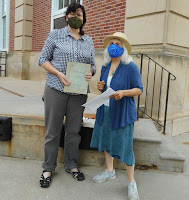 We arrived at the University of Nebraska at 1:00 p.m. for our appointment with University Library Archivist, Mary Ellen Ducey, to hand over my dad's notebook from his classes there to be a pilot in WWII. I had looked at the notebook a million times, been trying to donate it for years and finally got the invitation to donate. Ducey met us on the landing dock of the Love Library, as it was still covid closed, where I signed lots of papers.

Dad had only been 18 when he arrived there, with many others, for pilot training. He talked about the seven day a week, eight hour a day course load, which I found in his notebook schedule, along with notes for world history and U.S. history and his green-ink handwritten page for each of the nine flights he made. He had told us the story about arriving at the university late at night where all the G.I.s were put up ("for the duration" of their studies) on cots in the library. He woke up the first

morning to see a Shorb Avenue bus go by and thought for a moment he was back home in Canton, Ohio (which also  has a Shorb Avenue). He remembered having to wear a tie all the time and the long quiet study halls. And he remembered the day all the pilots were lined up and told that the war didn't need so many pilots, and --drawing a line to his right-- said everyone to the left, would be "washed out" and sent to gunnery school. But he had flown nine times, and I have his notes and maps to prove it.

We then went for lunch at a restaurant I had found, the Green Gateau, a casually elegant European-inspired bistro serving French and American food, and of course, gateau! and other desserts! The flash-fried artichokes with red pepper dipping sauce were wonderful, as was it all.

We drove on down the road to experience two days in Willa Cather's Red Cloud, Nebraska region. Interestingly enough, neither Paul nor I in all our reading had ever read Willa Cather, though I knew my former colleague Marianna Hofer and my poet friend Kevin Hearle were fans of her work. When I happened to pick up My Antonia this spring, I was verklempt by it, and I went on to read several other Cather novels. Paul read and liked One of Ours, which was her Pulitzer Prize winner, and I was in the middle of reading it (on audio) when Paul booked our two nights in the  George Cather Bed and Breakfast outside Bladen, Nebraska, which is, I have to tell you, truly truly is nowhere, miles down unpaved roads. We had chosen it when we were unable to get into the Cather Guest House in the much less miniscule town of Red, where Willa was raised, and what luck we had in our choice: 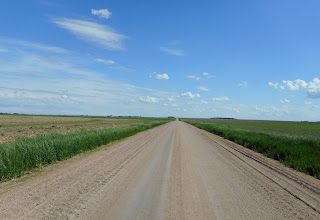 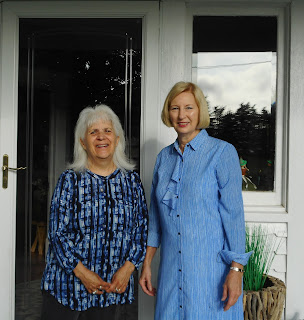 The owner and host is Lynette, who bought and really overhauled the house a few years back. It is the childhood home of G. P. Cather, Willa Cather's cousin who was killed in WWI and whose life and letters are the basis for One of Ours. Lynette was born and raised in the region, taught high school English (including, My Antonia which everyone reads), and has a deep knowledge of the place and the author and her people.

Our first afternoon, she served wonderful homemade appetizers and wine, then she drove us around, taking us to the house G. P. Cather built for his wife (who never really went to China) in the town of Bladen, which does have paved roads... and the Opera House where G.P.'s body was brought back for a funeral that over 2,000 people attended in that tiny town, after Willa Cather had visited her cousin's grave in Europe.

She also took us to the house and grave of Anna Sadilek Pavelka, on whom the character of Antonia is based. We had to wrench it out of her, but Lynette is related to Pavelka ("only by marriage" she insists), and she has great stories about several people and events that people Cather's novels. And Lynnette was an extra in the 1991 movie, O, Pioneers! which is available at the Massillon Library. 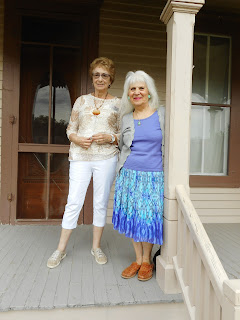 After one of Lynette's terrific breakfasts, we had a whole other day awaiting us in town the next day when we toured the Cather childhood home, with our terrific, friendly, and knowledgeable tour guide, Janet Maruhn, and then we spent quite awhile in the beautiful museum at the Willa Cather Center, which has an excellent video, gift shop, and exhibits (including an art exhibit of paintings based on Cather scenes). 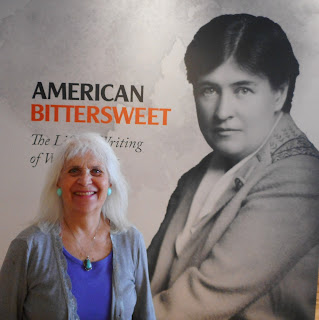 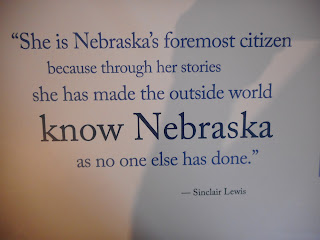 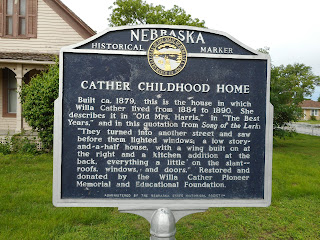 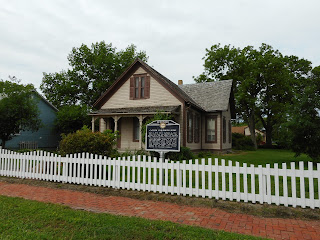 Paul and I then got a map and walked the town (tours are available if you prefer), seeing houses of families who are the basis for Cather characters, churches, and the train depot, central to the arrival of Antonia's family and many other very real immigrants to the region. 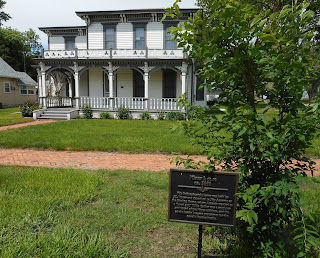 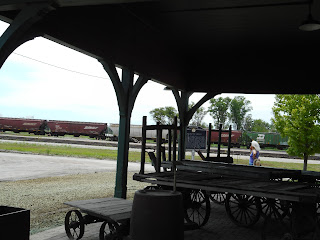 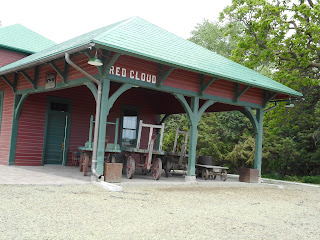 Back in town, we lunched on appetizers (deep fried gizzards for me, oh my cholesterol) of huge proportions at the Palace restaurant. One terrific waitress covered both rooms and the bar. Then we got directions out to the prairie, where we walked a bit, getting instructed by the land and the annotated postings. 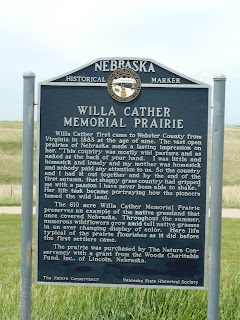 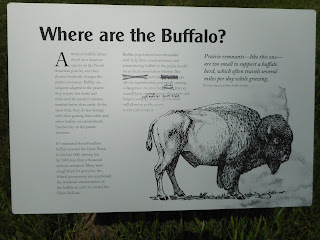 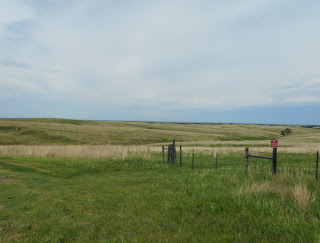 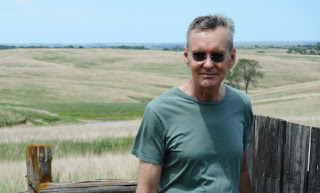 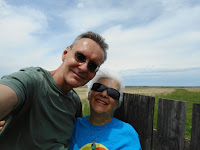 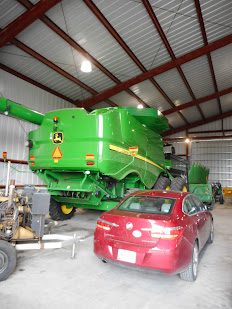 Huge storms were coming up, meaning we'd have to traverse that unpaved road that George and Enid traverse in a storm in One of Ours, and Paul is not married to the sort of woman who would take the wheel and save the day. Lynette was such a trooper and pulled together a meal--which was certainly not part of our reservation-- of pasta and salad and terrific wine and more appetizers. Hail was predicted and tornados, and she talked the next door farmer into letting us move our cars into one of his huge buildings for the night. And then the thunder came...and the rains, and, we heard, tornados, and a lot of lightning. But we slept, and rose the next day to sunshine and Lynette's waffles under the big eyes of this guy in the dining room, 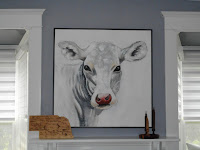 and the road out of town.
Once we once spent three days at Disney World, and it was not nearly as fun and instructive and healthy for us as this time with one of ours and her land and many of her terrific people.
Our thanks to all the people involved at the Willa Cather Foundation.