Woman with a Fan Links 2

María Gutiérrez-Cueto y Blanchard was born in Santander, Spain in 1881 and died in Paris, where she is buried, in 1932. 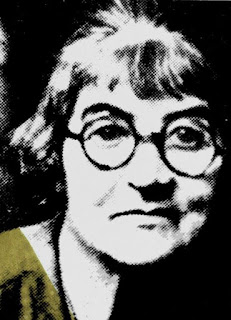 I like the hint of a smile in this one. I first saw it on a Facebook page, which has about 500 followers.

An exposition at the Reina Sofia Museum:
https://www.museoreinasofia.es/en/exhibitions/maria-blanchard
Documentary
The documentary, 26 Rue du depart, era una vez Paris is a documentary in Spanish by Gloria Crespo which examines Blanchard's life with interviews by people today. You can see the first three minutes on Vimeo:
https://vimeo.com/38234006
A short video at the Santander exhibition (in Spanish with English subtitles) includes interviews with art critic Maria Jose Salazar and others:
https://www.youtube.com/watch?v=32WQivz1HOk

On misshapen backs and luck: Spain and the U.S.

Blanchard sometimes said she left Spain because of the prejudice she experienced due to her disability, specifically, the way people would chase her down the street to touch their lottery tickets to her deformed back, believing it would bring them luck. "Only in Spain!" she said, and I nodded, thinking of some of the backward thinking I had seen there, especially in the 1970s. But then, Paul Beauvais found this NYT article about a bat boy who had a misshapen back, supposedly due to a fall:
https://www.nytimes.com/2021/04/02/nyregion/eddie-bennett-yankees-batboy-cemetery.html

A White Sox player put his hand on the boy's back, believing he was good luck, and the team took him on as its batboy. When they won the Series, he received a ring along with each of the players. Later, in 1921, the Yankees hired him away, for luck, and their wins were attributed to him as well as Babe Ruth.

My book, Woman with a Fan: On Maria Blanchard, is available from Shanti Arts.