FERRYING POETS AROUND OHIO: Creeley and Me in a Not Particularly Large Car

Now that I am on a roll of remembering poets, I decided to tackle my memories on Robert Creeley, but as I had had a partner for that journey, I called Columbus poet Jerry Roscoe, who had ridden along on the drive. 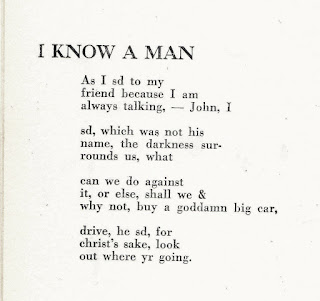 ("I Know a Man" by Robert Creeley)

"Diane, you wrote about this for Cleveland Poetry Scenes," Jerry said. "I've just been rereading it." Lo and behold, Jerry is right, and I have pirated some of this memoir from that terrific anthology, with thanks to Larry Smith and Mary Weems, its editors. 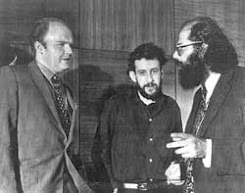 When Robert Creeley was visiting writer at Cleveland State for several weeks one autumn, he told me that he wanted most to visit the Asphodel Bookshop in Burton, and as much as the bookshop itself, he wanted to talk to Jim Lowell, who still sold letterpress books and broadsides out of a garage that also housed his wife's hair salon.

Creeley talked the whole ride out to Burton. Mostly he careened in speech on and on about people, all by first names, none of whom we knew. When we got to the bookstore, he went on in this vein, with Lowell nodding occasionally.  Jerry remembers that at one point, Lowell made fun of Diane Wakoski's work, and Creeley defended it. But otherwise, we were pretty lost as to whom was being discussed. At one point, Creeley mentioned, “Allen,” and Jerry, thinking we finally had an “in” said, “You mean Allen Ginsberg?”

“No,” Creeley answered. “Allen who helps me with plumbing.”

And so for the ride home, we didn't even try to ask questions. Jerry figured out that "Bill" was William Carlos Williams, but by then we just let him talk because he was "always talking." It was the last and the only time I was ever in a car with him.

He showed up in my C.S.U. office the next day, still talking-- and smoking. People smoked then on the 18th floor of C.S.U.! (And everywhere else.) He was frustrated about a manuscript about himself that a professor had asked him to proofread, filled with errors. “It even misspells Allen Ginsberg!” he said, showing me the error. We were both aghast.

Then he began about how much he disliked teaching creative writing, which he had been hired to do, in addition to sitting in on the C.S.U. monthly first Friday poetry workshop and giving an afternoon reading. He said he was trained as a literature teacher, for chrissakes, but he tended to get these gigs for teaching creative writing. Then a C.S.U. professor walked into the room, glared at me, glared at Creeley, and said, “Where have you been? The class began twenty minutes ago.” And he left with the poet in tow, casting one more look at me, who had unwittingly provided Creeley a 20- minute reprieve from the job.

Jerry and John Stickney bonded with Creeley about jazz and they had all planned to take him around the Cleveland jazz scene after the C.S.U. Poetry Forum, which was, after all, never a class. However, the excursion never materialized and Jerry thought it hadn't even registered with Creeley. Then a week, Creeley asked Marily Murray if Jerry were around. "So he seemed oblivious to us in the moment," Jerry comments today, "but he did remember." It was though Creeley was firing on eight cylinders, and we thought there were only six.

His afternoon reading was spectacular. As usual, he sat, a cigarette in his hand which combed through his hair and held the hank back with the hand to his cheek, his eye socket weeping, his voice steady as a metronome but musical too, not rhythm only. I remember that at one point, I was weeping, unconscious of what words had triggered my tears exactly, just filled with the emotion in the poems he intoned and the tension in the poems that filled the room.

I was not ferrying Creeley in 1994 when Joel Lipman and I read with him at the James Wright Festival in Martin's Ferry, Ohio. My most memorable moment of Creeley occurred the evening before the festival. The participating poets and the two festival organizers met for a casual dinner at a Chinese restaurant across the river in Wheeling. Creeley ended up next to my husband, and buttonholed him in conversation as he was wont to do, but this time, but once they were introduced, he realized he had in Paul a listener who understood him on postmodern literary theory. When Paul nodded, he knew exactly what Creeley was talking about, and it wasn't plumbing. Not only that, but Creeley learned that Paul's hometown was Fitchburg, MA, just down the road from his own hometown of Acton, about which he had many strong important memories.

But as we finished up the meal and headed off, he asked Paul about his work with a particularly liteary group. "Oh," Paul said, "No, no, that's another Paul Beauvais." "Oh good," Creeley said, "I like you better."

Creeley really seemed to enjoy the James Wright Festival, though he himself was a little more distanced personally from Wright than other poets had been. I think he especially enjoyed the incredible closeness and cameraderie and sense of home that pernmeated that festival. Bruce Jackson, once wrote:

One of Robert Creeley's favorite words was "company." He was always talking about being part of a company—a company of family, of poets, of artists, of this group here on this night around this table, eating and drinking and talking, always talking. When the company constricts so does your world, so do you. The first thing he said when we talked about Allen Ginsberg's death in 1997 was, "The company keeps getting smaller." Company, for Bob, was whom you thought in terms of, whom you talked with. --–Bruce Jackson, “On the Subject of Company” in Buffalo Report 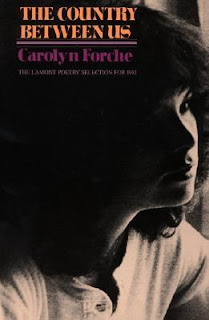 From 2000 till his death in 2005, Creeley was active in a yearly event in his hometown library of Acton. Someone at the library told me that he was spurred on to involvement by his memory of the Wright event. At any rate, the Robert Creeley Foundation set up a yearly poet award. I was living in Massachusetts at the time of the first award after his death, which was made to Carolyn Forche in 2006. I had always wanted to hear her read, as her book The Country Between Us had catapulted me into my work in Central America. She read from The Angel of History with her signature passion, which reminded me of Creeley's quiet passion. It was such a wonderful evening, and it felt like Creeley's gift to me, to all of us.

And the gift goes on. You can find all the Robert Creeley Award winners here , with the most recent poet listed being Mark Doty in 2018. In addition, the Helen Creeley Student Poetry Prize is given to two high school students to honor Robert Creeley's older sister Helen, a prize-winning poet while she was a high school and someone he recognized as mentoring him when he was young, yet another gift he has passed on.